Tele Bridge Choices: What I Like And Why, Part 2 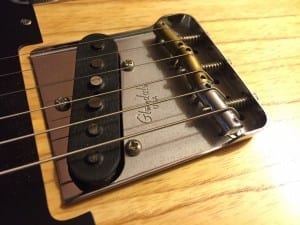 For my swamp ash Tele, I bought a Glendale cold-rolled steel plate with cutaway sides and a set of mixed (one aluminum and two brass) compensated saddles ($157). I like the plate design a lot, and it’s beautifully made. The saddles are tilted to compensate, but I still needed to bend the screw on the E/A saddle a touch to get the intonation just right. One drawback of this design is that the strings are apt to slip sideways on the saddles (as with the Barden), which doesn’t help your string spacing or intonation. I fixed this by figuring out just where I wanted the strings to sit, and filing shallow grooves to keep them in place.

These modifications worked great, but this bridge assembly is the most expensive one I’ve bought, and, for the price I paid, I feel that none of that work should have been needed. That said, it sounds wonderful, and helps the guitar to deliver perfect Tele tone. 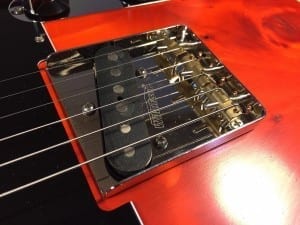 The orange Tele has an Asian-made Wilkinson bridge. I bought one to see how one of the cheaper aftermarket bridges worked, and had mixed results. It has a thin plate, nicely chromed, that sits perfectly flat on the guitar’s top. The lack of flatness is a common problem with cheaper bridges, but not here. The three brass saddles have ridges to set the intonation, but the ridges aren’t even close to where they should be. That’s an unwelcome surprise.

So, I tried the old bend-the-intonation-screw trick. First you set the saddle so that the strings (two per saddle, old school) are off by equal amounts. One will play sharp, the other flat. You can use pliers to bend the screw, or hit the saddle with a hammer to bend it. In many cases, it works well, sometimes perfectly, but not here. The witness points are simply too far apart.

The solution? I had to file new witness points, and was able to get it dead on. The bridge sounds great, very Tele! Next time I re-string the guitar, though, I’ll replace the cheapo saddle intonation screws from Wilkinson with stainless steel ones that have clean Phillips heads. The hybrid (works with a flat or Phillips screwdriver) screw heads on the originals don’t fit any of my screwdrivers well and will strip out fast. Not cool. But for the money, you get a great a good-looking, great-sounding bridge that can be made to work right, if you’re willing and able. 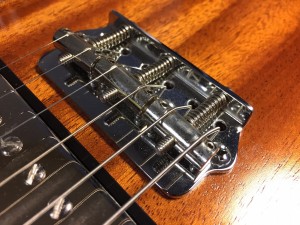 Last up on my list is the bridge on my mahogany Tele with humbuckers. Already we’re pretty far from the stock Tele tone recipe here, and using humbuckers means I need a half-bridge, one that supports the saddles but doesn’t also provide a mount for the bridge pickup. Marc Rutters to the rescue with his chopped half-bridge ($85), with a thick steel plate and three compensated cold-rolled steel saddles. The three saddles are about the only part of the traditional design in use here. Looks cool, sounds awesome, and sets up perfectly. I wish he made Strat bridges.

Plenty of food for thought here. Consider these bridges and other choices, along with the wooden parts you want to use and the pickups you intend to install. All these things work together to help you get the sound and playability you want…or not, if you don’t think enough about your choices. I can help with that.