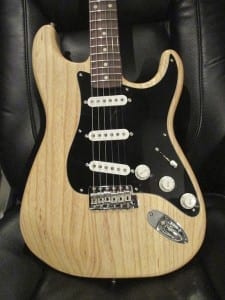 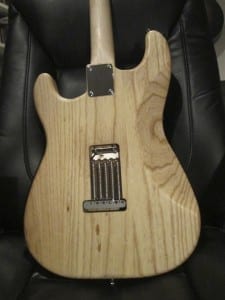 After assembling three Teles and re-necking a Strat, I thought I’d go ahead and put together a complete Strat from scratch, just to see what would happen. I found my way to Larry’s booth (Clearfork Designs) at the November 2013 guitar show in Oaks, and picked out a swamp ash body made from three pieces. That became part of the “angle” – I always have an angle – on this project: would I hear a difference that could be traced back to using a body made of so many pieces? The other project guitars I’ve done are one or two pieces. That costs more, but there’s no science I’ve seen that proves using fewer pieces guarantees “better” sound.

I decided to stick pretty much with Fender parts, except for the Allparts neck, the bone nut, and the electronics. The pickups are from Ron Ellis, and are his 50/60 set with the hotter bridge. Ron mixes magnet types when he winds, the idea being to tailor them to the sounds of the three plain and three wound strings. Whatever, it works, and his pickups sound great! They’re not really an attempt to recreate a vintage set, to my ear. He has his own thing happening.

The body sanded beautifully. I had more work to do this time because it was just off Larry’s CNC machine, and he hadn’t had time to do the finish sanding he usually offers. I waited until I was in the mood to sand (it can be very peaceful, but I need to feel patient), and had at it. Different curves than a Tele’s, of course, and the arm and belly curves had to be smoothed, but it went quickly and, as you can see, looks great.

Assembly and setup went without a hitch. I always get a great fit with Larry’s bodies and the Allparts necks; very little fitting needs to be done there. I went with the three-ply black pickguard and white knobs and pickup covers because the woods would work with the high visual contrast. Translation: I think it looks cool, so I did it. So there.

And the sound is great, very open and articulate. All these thinly-finished guitars “speak” quickly. I can’t hear anything that I can definitely say has to do with the three-piece body. For all I know, it sounds better this way!