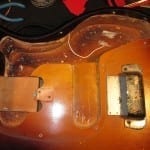 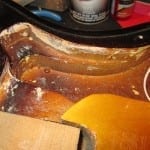 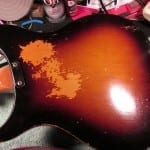 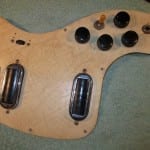 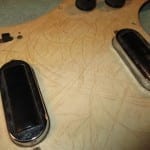 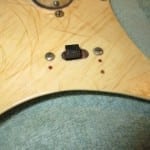 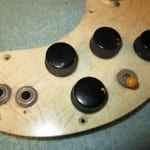 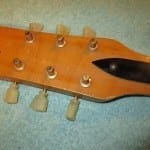 This guitar belongs to my friend Dan. He was having a little trouble figuring out the controls, and asked me for some tech help. I hadn’t seen one of these in a very long time, so I thought I’d take a few pictures when I went inside it to see what was what.

These guitars look like a Rickenbacker design. They were built in the U.S. with an interesting mix of high-quality parts and some construction techniques that are reminiscent of, say, an old Danelectro. The first picture shows the body’s interior and the neck tenon. That screw at the end of the tenon and the two screws and plate you see on the back are what keep the neck and body together. Looks like it might not hold, but this guitar was built in 1960 and has held together fine.

The second shot shows what seems to be laminated construction in the body. In other words, the body was built from a few slabs of wood, rather than one piece that was then routed out. This almost-semi-hollow design makes the guitar very light, and contributes to its acoustic sound. The front and back have a cool three-tone sunburst finish, and it shows its age beautifully.

The pickguard appears to be made of fiberglass. What look like deep scratches are an intentional part of the surface texture, with maybe a bit of dirt added; 1960 was a long time ago. What jumps out when you look at the control array is the pair of output jacks, which implies the wiring is going to work a bit differently than you’d expect. The colored dots are clues to what turns out to be a unique wiring scheme; pretty clever stuff. Details in part 2!